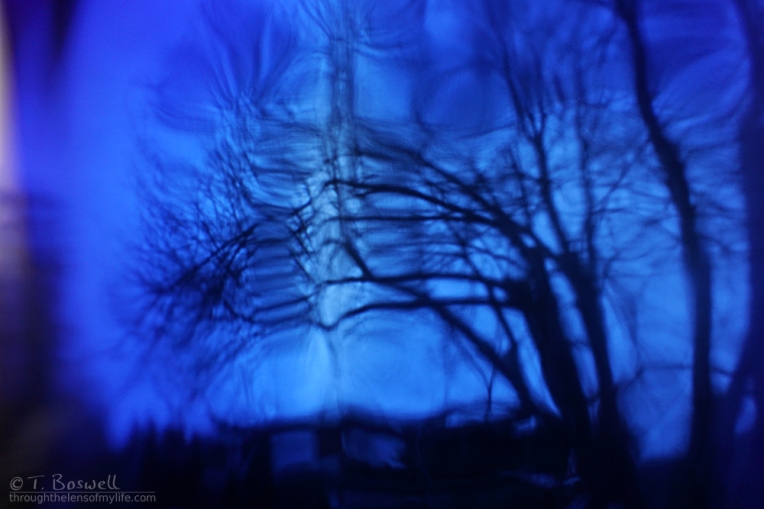 Shot through a blue bottle, this photograph is my response to Jennifer Nichole Wells’s One Word Photo Challenge: Bottle, and Ben Huberman’s Daily Post Weekly Photo Challenge: Abstract. Thank you Jennifer and Ben for the challenges! 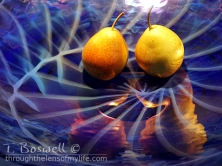 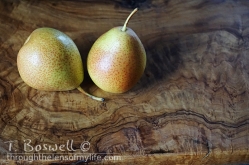 (Click an image to see it larger or to start a slide show.)

This is my response to the Photography 101 prompt, “double.” All of the photos were taken using natural light except for one. I’m sure you can tell which one!

Four bottles on my windowsill.

The view through the bottle on the right. 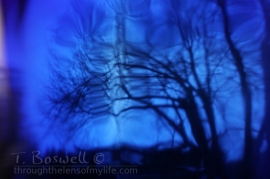 This is my response to the Photography 101 prompt, “glass.”

I started with four bottles on my kitchen windowsill. I noticed that I could see the trees in my yard through the bottle on the right.

I took these photographs from inside my home looking outside into the light with the camera lens pointed through the blue glass bottle.

It was difficult to come up with a response to the One Word Photo Challenge: Eminence.  I couldn’t think of any subject matter to express eminence, and at first glance saw nothing purple in my home. Then I thought of the two chunks of amethyst that currently live on top of our old piano. I set them up in the kitchen on a black background with a rose plucked from its Patron vase. In the background I placed several blue glasses and lit it all up from the left with a light clipped to the back of a chair.

I’m not sure if I achieved eminence, but I like the blue highlights in the background and will try that again!

Thank you Jennifer for the One Word Photo Challenge: Eminence.

I took these two photos at two different times of day on Wednesday in response to the prompt for day seventeen of Photography 101: Glass. It was during this winter’s first snow.

Outside was a soft monochrome world,  dimly lit, the sky grey with snow, and the trees blanketed in white. Inside the room was shadowed, the sunlight never making it much past the window panes.

I was struck by the way the colored glass on the widow sill caught what little light there was, more so in the first photo than in the second, and how in both, the color of the glass separated itself from the rest of its surroundings.

The second shot was too dimly lit for my old G9 to handle. It’s grainy, but I didn’t want to turn on the flash and lose the muffled mood of the scene.

What about you? Would you have deleted the second photo?

Thank you Jennifer for the One Word Photo Challenge: Sapphire.

I could have used my previous post for this theme, but decided to photograph some of the sapphire blue bottles that I’ve collected over the years.