I took these three photos a few days ago. As the sun set the light changed from golden to gray. 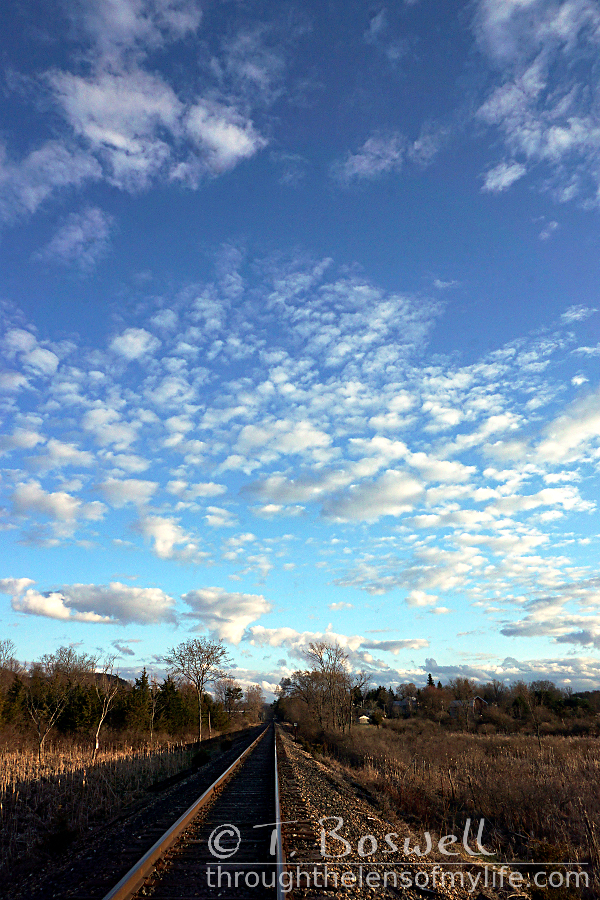 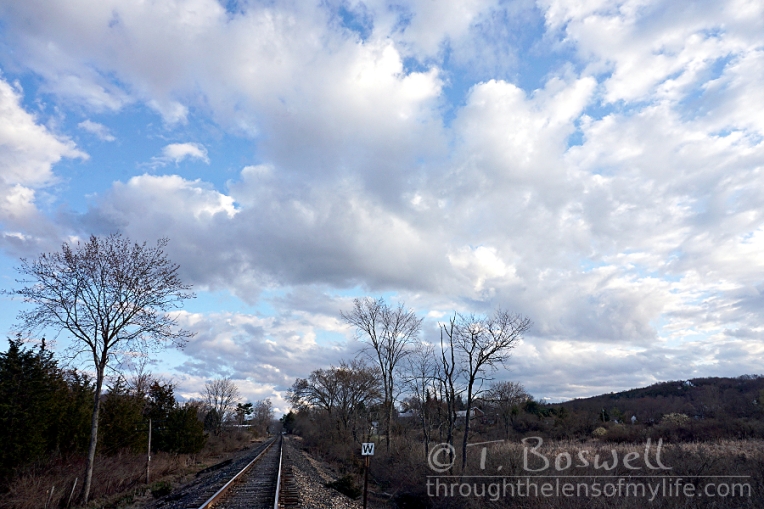 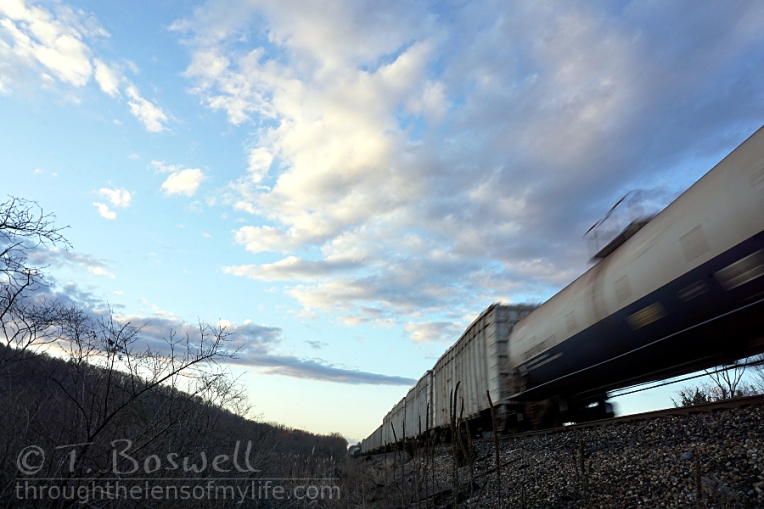 My response to Cee’s Fun Foto Challenge: Clouds, and Cee’s Which Way Challenge: 2015 Week #16. Thank you Cee for the challenge!

I took this photo of a narrow side street, abloom with potted plants and awash in light and shadow, in Assisi, Italy. The sloped sides of the street were built to accommodate cart wheels while the steps in the center help people get safely down the incline which can become slippery when wet.

Just past the large potted plant on the left, within an opening in the stone wall, is a lovely little iron gate with a few small steps and an iron railing leading up to it. You can view photos of these in the gallery below. The second and third photos give a better idea of just how steep this little street is. 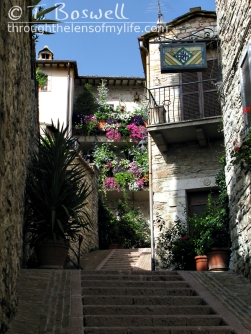 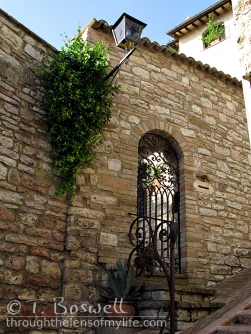 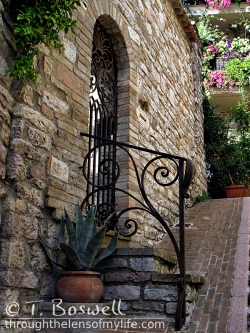 This is my response to Cee’s Which Way Challenge: 2015 Week #15. Thank you Cee for the challenge!

These two photos are my response to Cee’s Which Way Challenge: 2015 Week #14. Thank you Cee for the challenge! 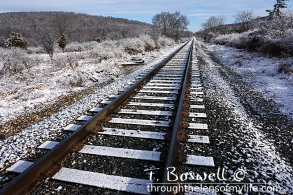 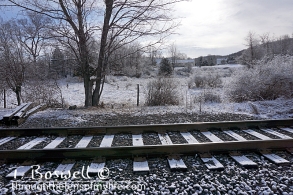 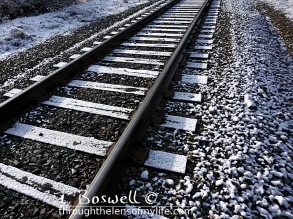 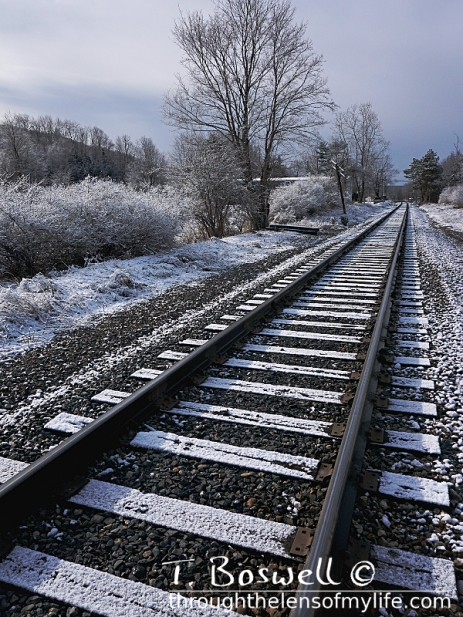 I thought perhaps I was done with snow shots for the season, but this morning, April Fool’s Day, in spite of spring having arrived on the calendar almost two weeks ago, there was snow on the ground. It seems mother nature has a sense of humor.

I took a walk over to the railroad tracks and became fascinated by the snow that had selectively accumulated about 1/4 inch or more on certain surfaces. The tracks looked like a series of white stripes strung together by two dark ribbons.

In response to Cee’s Which Way Photo Challenge: Week #13. Thank you Cee, for the challenge! 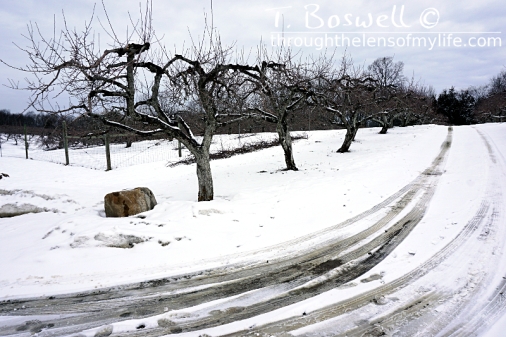 The road through Applewood Orchard and Winery, 2015. Warwick, NY. 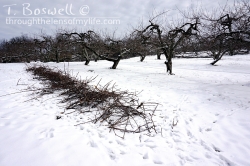 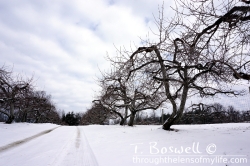 The road through Applewood Orchard and Winery, 2015. Warwick, NY.

(Click on an image to view it larger or to start a slide show.)

I took these photos of a cluster of animal tracks and the road into Applewood Orchard and Winery in Warwick, NY on Saturday, March 21st. Spring was supposed to have arrived. Instead we got winter’s last(?!) hurrah!

To see photos from the day before when the snow was coming down and my bird feeders were a flurry with a variety of flying feathered fun, squirrels, dear, and chickens too, click here.

This post is in response to Cee’s Which Way Photo Challenge: 2015 Week #11. Thank you Cee for the challenge!

Sometimes there’s something I see in one of my photos when it’s large on a computer screen that I missed in real life. I’m not usually visually unaware, so perhaps this is because I’m nearsighted. Then again, perhaps I become so focused on certain aspects of a scene that I miss others.

I was trotting along to get myself across Allen Street and catch up with my family when I stopped to take this photo on a cold day at the end of December. As I was rushing across the street, I glanced to my left and saw this… 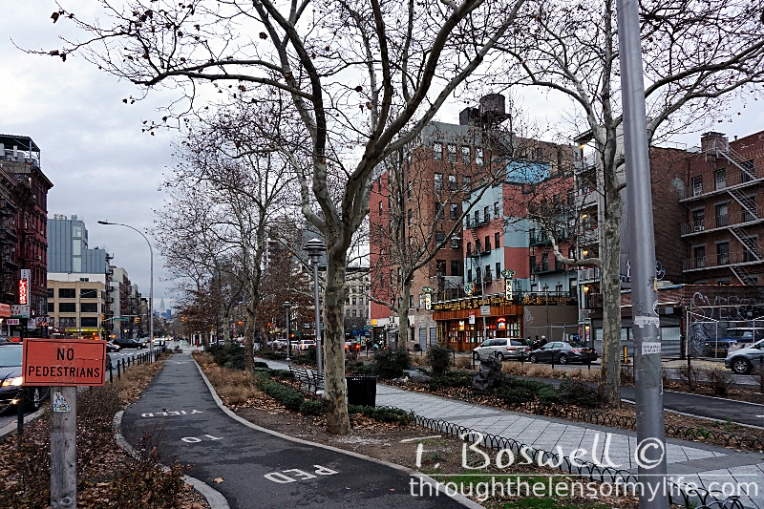 The camera hanging around my neck begged to come out from under my coat.

I was taken with the curve of the bike path, the straightness of the walkway, the orange “No Pedestrians” sign, the street lights beginning to glow in the dimming light, and the center line of trees, along with the buildings on either side receding to a vanishing point.

What I missed that day was the Empire State Building slightly to the left of the vanishing point.

If I had seen it, perhaps I could have gotten a quality shot of Allen Street crossing Delancey instead of this version which I cropped from the photo above. 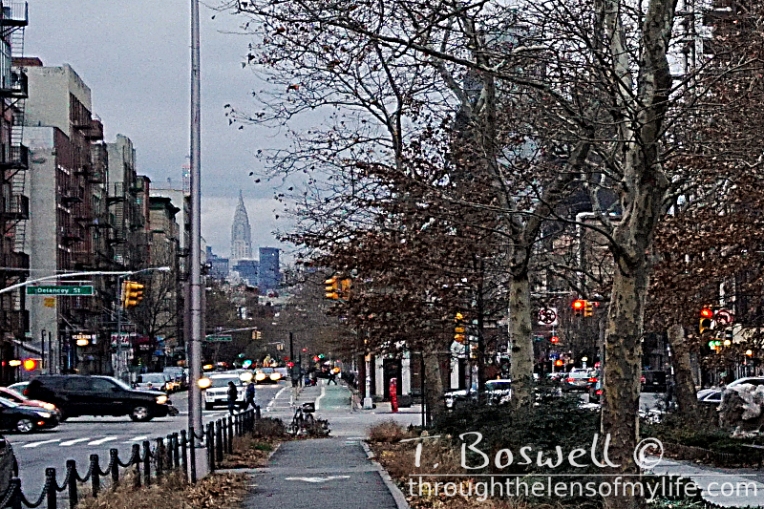 Then again, maybe I wouldn’t have. I had left the zoom lens, along with its extra bulk and weight, behind thinking I wouldn’t need it being hemmed in by large buildings without a panorama in sight!

What about you? Have you ever found something in one of your photos that you didn’t see when you took it? Have you ever intentionally left behind a piece of equipment and then regretted it later?

To see another photo that includes a little surprise that I initially missed, click here.

My response to Cee’s Which Way Photo Challenge: 2015 Week #9. Thank you Cee for the challenge!

Cropped or uncropped, what do you think? 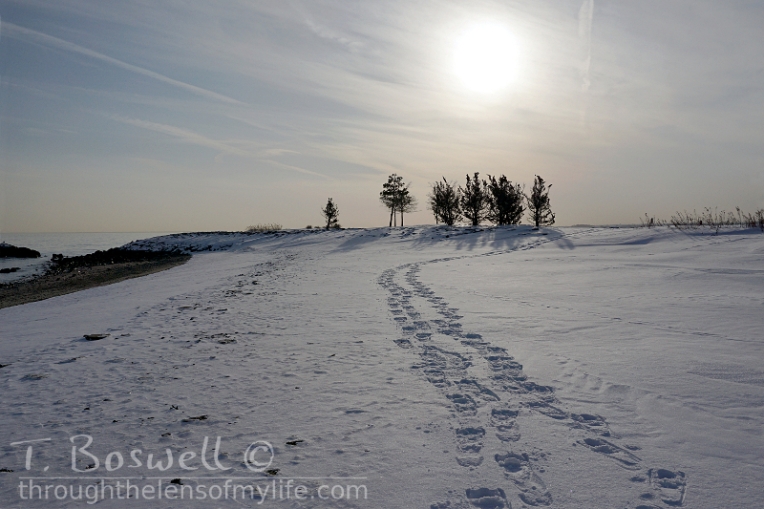 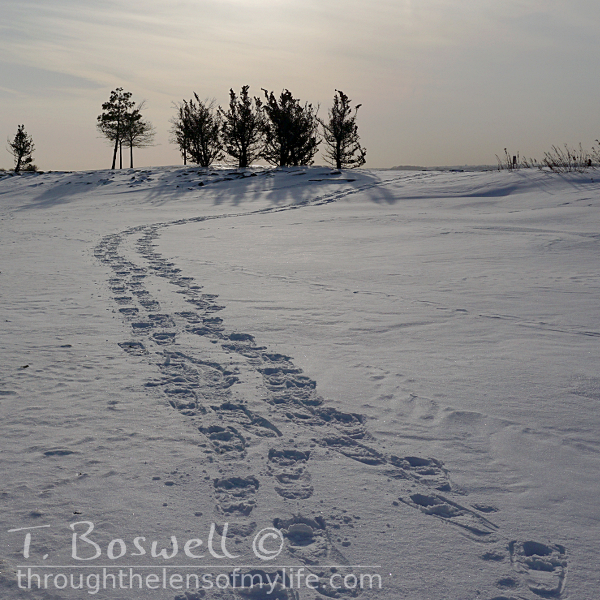 Last week I took a walk over to the Seligmann Center for the Arts, shown here to the left of the road, and caught sight of Sugar Loaf Mountain as the sun set, still bright with light compared to the shadow that I was standing in. 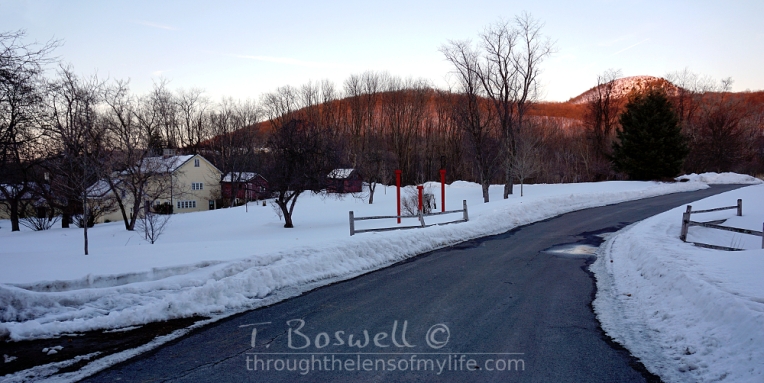 My response to Cee’s Which Way Photo Challenge: 2015 Week #8 and the Photography 101 prompt “Street”

In response to Cee’s Which Way Photo Challenge, “to capture the roads, walks, trails, and rails, we move from one place to another on,” I’m  posting these photos that I took a couple of weeks ago.

There are fully functioning railroad tracks under that foot or more of precipitation. The photos reveal a quiet time between a fresh snow and the next freight train, which usually passes by twice daily. Two views face south and the other two, north.

It amazes me how the weather can so effectively desaturate the color from the world! 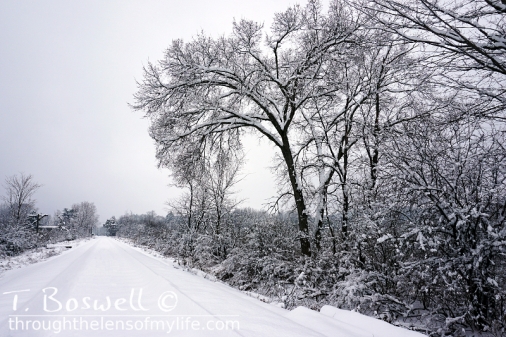 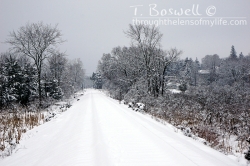 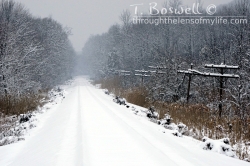 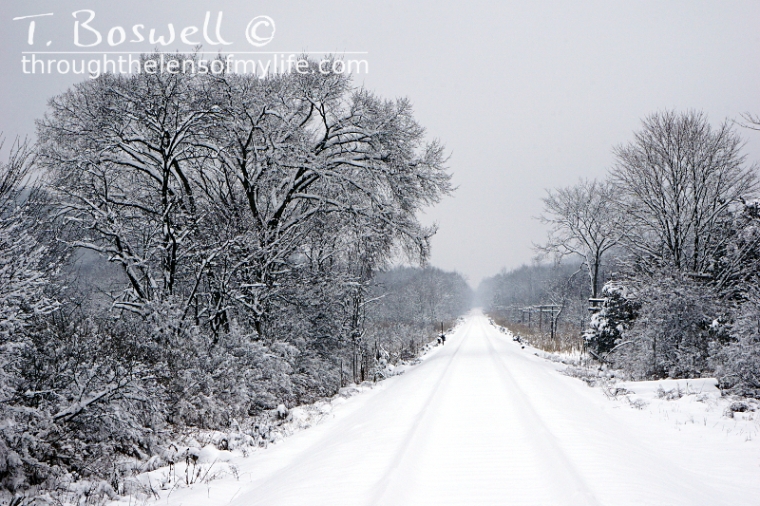 Thank you Cee for the photo challenge! 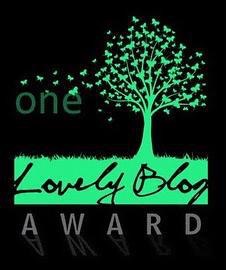 The Saga of Modern Feralgenaria